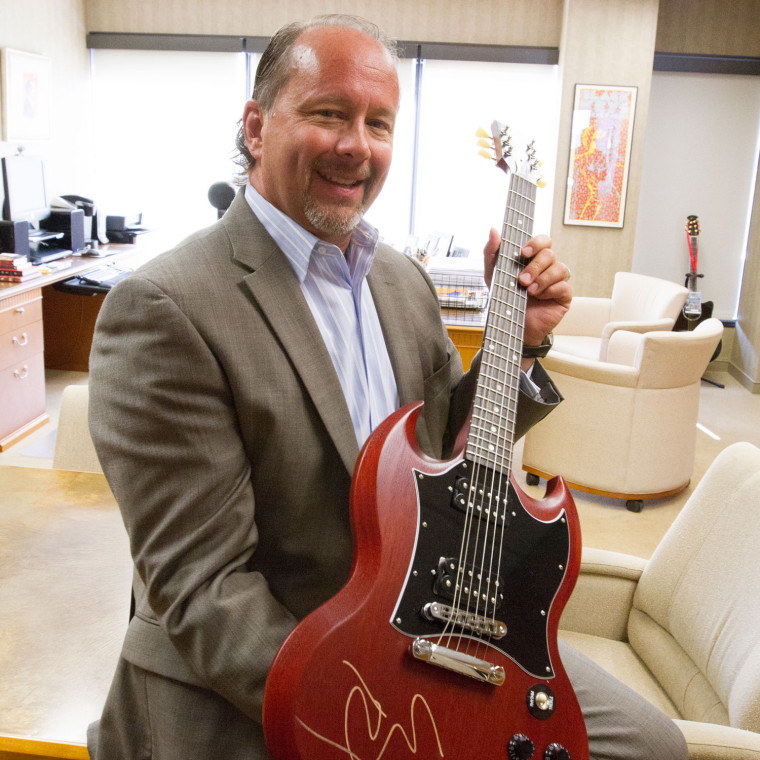 Head of Klipsch and Jamo since 2011, Paul Jacobs joined Klipsch 20 years ago as a sales manager. Passionate about music and sound, this concert enthusiast accepted to talk to us about his collaboration with Paul Klipsch, Klipsch?s place in the home cinema world and even about the future of the prestigious Heritage series.

Son-Vidéo.com: You worked with Paul Klipsch, founder of Klipsch, can you talk to us about this collaboration’

Paul Jacobs: To say that I worked with Paul Klipsch would not accurately portray how our relationship worked. I began my career at Klipsch and Associates in December of 1990 as a 32 year old high energy sales type. Paul Klipsch was an 86-year-old inventor with patents in audio acoustics, ballistics, and geophysics. Paul was a founding member of the US Audio industry, an entrepreneur and mad scientist of sorts. Perhaps his greatest skill was story telling and teaching. I spent as much time as possible with Paul to learn how he built Klipsch, to understand what drove his passions, to plug into what would be my greatest business experiences. Sitting in the shadow of greatness and learning about his first speakers that he built while at Stanford University. I was witnessing history as it was happening and perhaps would be one of the rare few to receive this kind of postgraduate education. Paul would be going through his archives and show me pictures with Paul Klipsch, James B Lansing, Avery Fisher, Saul Marantz.

Paul would describe going to hear live symphony on Sunday afternoons with friends and then spending the week trying to build a speaker that replicated that live music experience. For a young sales person it was extraordinary.

Paul Never stopped working on speaker designs even up to his death in 2002 at age 98. Paul truly lived his life his way, lived his passion and instilled in me an obligation to insure Klipsch always adhere to his core values. I later took over all product design and engineering and eventually became CEO. I?ve always ask myself what Paul would do if he landed in today?s environment and try my best to keep his legacy alive and authentic in everything we do at Klipsch.

The anecdotes are too numerous to list, however there was one I will never forgot. The first ten years I worked for Klipsch, I spent a significant amount of time in Hope, Arkansas, where our design and manufacturing was located and where Paul resided much of the year. No matter how low key I traveled, Paul and Valerie (i.e. his wife) knew I was coming almost before I did. That meant they expected me to come to their house and Valerie would say  ?you boys can talk about speakers and I?ll make you a snack?. In the living room were a set of Klipsch horns with a massive Belle Klipsch center channel. The first center channel ever developed. Paul developed it in the mid 1950s. Also in the room, a vintage Bosendorfer and Steinway grand pianos setting nose to nose. Valerie is a classically trained pianist and might just sit down to play while there. As soon you walked in, Paul would bring out a bottle of Bushmills Irish whiskey and one of his favorites Belgian beers. He liked to talk speakers over his favorite drinks. Valerie?s snacks often turned into 5-7 course feast. We would drink, eat, while talking speaker design and history, and Western Electric Horns, and life. But always at some point Paul would look at me as if this were the first time ?Young Man, I?m going to play for you the Bell Laboratories 1935 symposium on auditory perspective?. He would then put an LP on his turntable and off we would go.  This exact scenario occurred so many times in ten years that these visits affected my life then and to this very day. I respected and appreciated every single word Paul said.

It is said that Klipsch Heresy speaker were designed in very peculiar conditions.

Keep in mind, when Klipsch started, tweeters did not exist and neither did stereo. The Klipsch dealer network were generally radio shops with single Klipsch Horn speakers. When the concept of stereo began, Paul worked on a concept to demo for retailers and customers,  a new experience which he felt would change the game. He design a speaker that lived up to his high standards and which could also be transported easily. The Heresy was that product. It was named the Heresy because as a speaker that was not fully horn loaded (i.e. the bass driver only uses a sealed enclosure), yet Paul felt horns were necessary to obtain the best possible sound. Paul built it, Screwed a door handle on it for easy carry then took two Brooke 10 watt tube amps, used another door handle on those and jumped in his plane at the Hope airfield and flew around the country hooking the Brooke amps and Heresy up with the Klipsch horn.

Is there any plan to add speakers to the Klipsch Heritage series, which already features the Klipsch Horn and Heresy III?

Klipsch Heritage speakers continue to represent the iconic designs that made klipsch a leader in high performance audio around the world. Adding products to the heritage series becomes tricky. They are Heritage for a reason. That being said we intend to do several things to keep this an exciting part of our portfolio. This coming 2016, is our 70 year anniversary. We will offer a very limited number of 70th anniversary edition Klipsch Horns, La Scala, Cornwall and heresy speakers. Additionally we will be doing an upgrade version of our RF-7 series. In addition, we will be delivering a limited edition powered Heresy and Heresy mini. We feel this stays true to the original intent while applying new technology to authentic handcrafted high performance products.

What are Klipsch?s strengths regarding home-cinema?

Klipsch is the number one supplier of professional movie theater products in North America. Fifty percent of all cinemas in the US feature Klipsch products. There is a reason. Our speakers sound better, take less power do not break. Hope Arkansas is our test facility for our global speaker development program. Everything we learn in the development of our professional products goes into our home cinema products.

Klipsch Horn loaded speakers have a high sensibility, which means they play loud and use less power with lower levels of distortion.

Their flat frequency response means they deliver the sound the artist intended. Controlled polar response ensures that the sound is directed to the exact right spot. Their wide dynamic enables the listener to hear everything, from the biggest explosions to that quiet scene when two people are whispering. No other speaker can deliver this type of emotional experience and there are good reasons why.

Over the past 15 years, which were the most important innovations in home-cinema?

In  In the past 15 years, the innovations we feel have been most impactful would be driver and materials development. Sometimes the refinements are subtle but when incorporated with other innovations listed below they end up creating a much stronger overall product. Advancements made in power supplies have also been very important. There is no doubt that the single biggest innovation in the past 5 years have been wireless application. Klipsch will launch the first high definition wireless home theater speaker in January. Demand is high and we are ready to answer its call.

The latest addition to the Klipsch catalog are the new Atmos speakers from the Reference series? 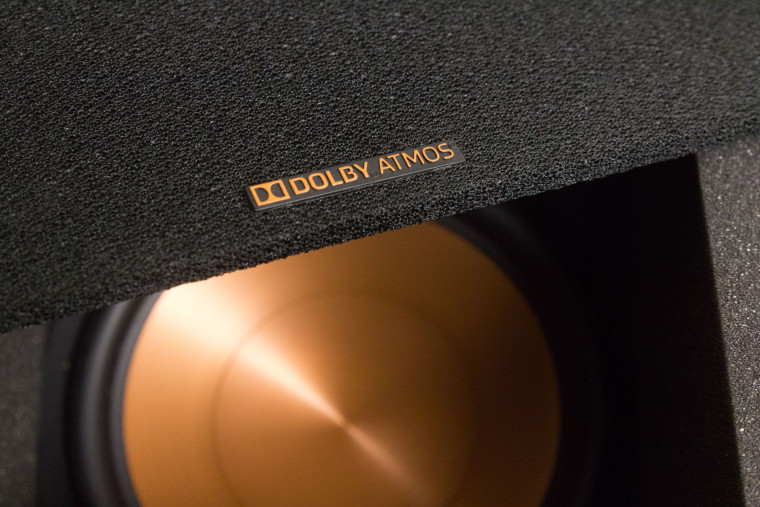 These speakers were developed to avoid installing speakers directly into the living-room ceiling, can you explain how they work?

Can the Dolby Atmos Klipsch RP-140SA be used on top of any other floorstanding speaker?

Yes, it can be paired with any speaker on the market today.

In a dedicated home-theatre room, can in ceiling speakers such as the Klipsch R-5650 be used for Dolby Atmos applications?

With seven to eleven speakers involved in a Dolby Atmos system, should listeners use a single or dual subwoofer configuration’

We would always recommend a dual subwoofer configuration, especially for larger systems.

How do you imagine Klipsch in 15 years?

The next 15 years, Klipsch will continue to innovate in systems and materials development. We believe the advancement of high definition wireless audio and the ability to create an effective ecosystem to share the music listening and home theater experience at home. We also believe that technology development will allow greater performance and greater affordability for larger groups of customer. Our main goal is to stay focused on delivering products from our current and future heritage to hi-fi enthusiasts. 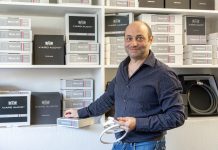 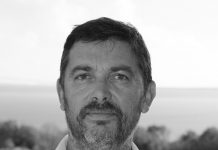 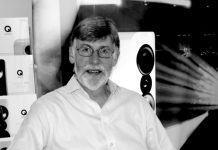